Home Citizenship Engagement YNaija2019: These are the 10 Nigerians that SHOULD run for president in... 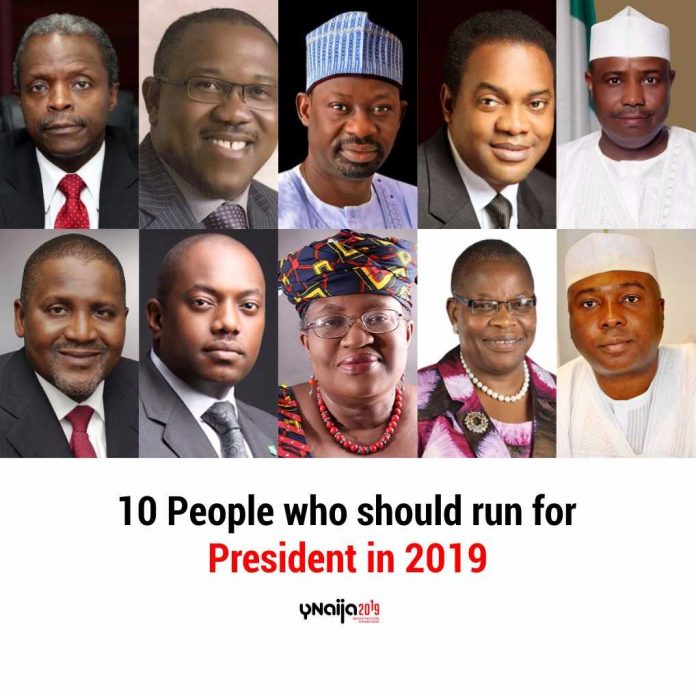 Aside from the office of the citizen, that of the president is the most important one in the land. Recent events have highlighted the importance of carefully scrutinising everyone who aspires to lead the country. Immediate challenges include the economy, internal security and a pressing need to heal and unite.

As the race for 2019 heats up, we take a look at 10 men and women who should seriously consider running for president. Jokers need not apply.

As the biggest economic contributor from the private sector, the influence that Aliko Dangote commands is immeasurable. He has had extensive experience in government, going back to the days of President Olusegun Obasanjo. Since 1999, Dangote has served in Obasanjo’s economic management team, Jonathan’s national committee on job creation and Buhari’s high-powered committee set up to rehabilitate infrastructure and resettle internally displaced persons in the North-East sub-region. Only recently, Dangote was named vice chairman (private sector) to the board of the Nigerian Industrial Policy and Competitiveness Advisory Council. All this government experience, plus his skill in big business and making prime deals could bode well for the country should he decide to run for president. With a businessman president like Dangote, a redirection to pure capitalism may be what turns around the economy eventually.

Ibrahim Hassan Dankwambo
For the Peoples Democratic Party (PDP), the 2015 gubernatorial polls were a disaster in the North as the former “largest political party in Africa” collapsed like a pack of cards thanks to the Buhari factor plus the APC’s Change mantra. The only sitting PDP governor to survive the tsunami is Ibrahim Hassan Dankwambo, the quietly effective governor of Gombe. Dankwambo was re-elected mostly on the strength of his achievements in infrastructure. He is reported to have constructed a road network of over 3000 kilometres and has improved upon the state’s water resources. Other achievements include in education and transparency with state finances. Gombe remains a backwater state though and the PDP’s fall from grace may impede Dankwambo’s ability to canvass the entire country for a truly national mandate. He once served as Accountant General of the Federation but even that is unlikely to keep his name in the national conversation.

America got a baby boy president with Barack Obama. Nigerians are definitely (over)due for some charm offensive and who better than the culture loving, saxophone playing Donald Duke to bring it on. As the former governor of Cross River, Donald Duke proved he possessed the grit and determination to play in the big leagues and what is more? He isn’t afraid to dream big. Everyone knows Nigeria could use big dreamers, especially after the last two years. The Obudu cattle ranch and its offshoot micro-economies, the Tinapa resort (whether it succeeded or failed is another matter entirely,) the Calabar carnival, the state capital’s infrastructural facelift, are just a few of Governor Duke’s legacies. The fact that he still remains as popular ten years after he left office, hints at the goodwill that Duke can take advantage of for a run for higher office. His recent appearance at The Future Enterprise Symposium for Emerging Leaders got the youth block energised once more.

For a change of pace, consider the candidacy of Fela Durotoye, the motivational speaker and leadership coach with a fierce love for country. Durotoye is an outlier obviously and does not identify with any of the major political parties, but consider the fact that a long, unbroken line of career politicians and military dictators got us into this rut that we find ourselves. Since the failure of the political class has been established, an alternative would be to seek for passionate, charismatic and renowned professionals who possess the capacity to lift the national mood out of the recession and make us feel better about ourselves. Durotoye could invigorate the campaign trail with his intense speeches, especially with the educated and the idealistic demography. He could inspire first-timers to go out and vote. FD has had experience running the GEMSTONE group. With a woman like Tara beside him, who’s to say that anything is impossible?

Obiageli Ezekwesili
Passionate, driven, patriotic, are just some of the words that have been used to describe Obiagaeli Ezekwesili, the co-convener of the #BringBackOurGirls group, renowned for keeping the issue of secondary school girls taken from their school in Chibok, Borno state in the news. Nigeria is overdue for leadership that is inclusive and is committed to the maxim that all Nigerian lives matter and Ezekwesili has just the right bonafide to provide that kind of leadership. We worry about her bullish tendencies but even that is required governing a complex terrain like Nigeria. Ezekwesili has high-level experience in the development (World Bank, Open Society Foundations) and public sectors (Ministry of Education, Budget Monitoring Unit). Her campaign to recognise the Office of the Citizen as the highest in the land should ensure that a government led by her upholds the rights and active participation of the citizenry. Plus who wouldn’t want to see she and Trump go toe to toe on Twitter?

The former Coordinating Minister for the Economy has her critics but even the least yielding of them would not deny her formidable profile as a global leader and world citizen. A revered economist and development expert with degrees from Harvard and MIT, NOI will bring to the job, her immense goodwill and clout in lifting Nigeria from the economic doldrums. She may run into trouble on the campaign trail thanks to her elitist background but her work for country should speak volumes. The YouWin programme which was a key achievement of her tenure as finance minister has been continued by the Buhari administration and who can forget her roles in helping to secure the Paris Club debt relief during the Obasanjo regime? NOI also made advances in cutting government waste by introducing the integrated payroll system for government workers and regularly published details of government expenditure.

As governor of Anambra, Peter Obi was quite unpopular. Civil servants found his austerity measures toxic to their survival and thieving contractors had to temporarily leave town because Obi made it clear he wasn’t in the business of throwing crumbs to the boys. But as his vision gradually began to take hold, Anambrarians began to appreciate the new template of leadership that Obi was offering. It was no walk in the park for him too. He fought off godfathers, usurpers, and a sitting president on his way to legitimising his mandate. By the time his tenure was over, Anambra was the better for it as Obi had laid critical foundations in such areas as infrastructure, education and agriculture. But it is in the economy that the businessman has created a lasting legacy. His culture of saving for the rainy days and keeping government expenditure at the barest minimum has been credited with helping Anambra survive the economic meltdown.

President Buhari has been away on medical vacation for the second time this year. Nigerians did not miss him. Thanks to the invigorating and sure-footed leadership of Acting President, Yemi Osinbajo, the machinery of government has not ground to a halt. Osinbajo managed to score one of the biggest coups of the Buhari presidency when he attended a symposium celebrating Biafra at 50. His presence sparked a much-needed national debate on the civil war and pointed the way to genuine deeper reflection as a way of getting past the hurt and bitterness that is still pervasive. Osinbajo has also championed causes like ports reform, ease of doing business, while at the same time bringing back the element of empathy that has so far been alien to President Buhari. A lot of Osinbajo’s achievements are low hanging fruits, however, as the economic team which he heads has been complicit in failing to tackle the recession problem headlong. He has also been unable to sign into law the budget that would okay federal spending for the fiscal year.

The Senate President has huge ambitions and he isn’t afraid of deploying Machiavellian means to achieve them. Recall the environment that led to his election into the number three position in the country. After his stint as the chairman of the then influential Governor’s Forum, Saraki, who inherited a political dynasty by seizing it from his late father, moved over to the Senate. It was there that he played a pivotal role in the faction of the PDP that broke away to join the All Progressives Congress. Despite some distractions, Saraki has been able to lead the 8th Senate deftly, carrying most of his colleagues along despite political differences. His leadership has helped the Senate regain a streak of independence from the executive and has witnessed the contemplation of potentially game-changing bills like the petroleum industry and the anti-corruption bills.

Former Speaker of the House of Representatives, Aminu Tambuwal was placed on a spotlight that guaranteed national recognition when he cut a deal with the APC opposition in the house and was swept into office. He spent the bulk of his tenure at odds with the PDP establishment who did not support his ascendancy in the first place. As the Goodluck Jonathan presidency approval ratings plummeted in the final months, Aminu Tambuwal rode on the anti-establishment wave and was expected to make a play for the presidency. His cross-carpeting to the APC landed him his present gig as governor of Sokoto state instead. But this position is viewed as a temporary one as Tambuwal remains one of the names hotly tipped to secure the North’s clinch on the presidency for the next four years at least, should Buhari’s stay in office become untenable. His performance as governor has been largely uneven.