Home Governance This 32-year-old Muslim running for governor in America may be a model... 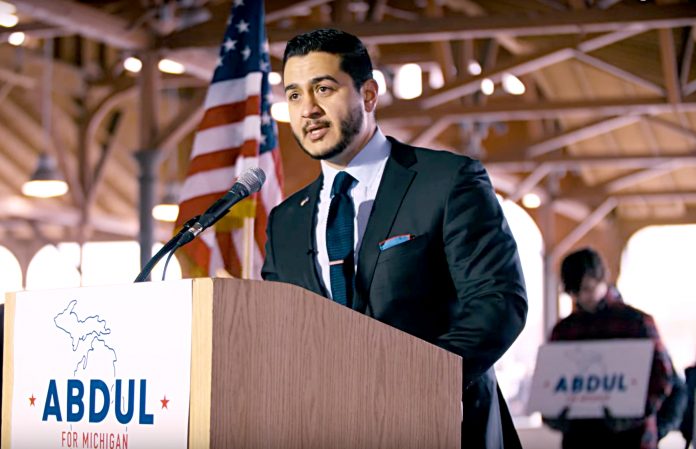 The 32-year-old El-Sayed is intends running for the governorship office of the state of Michigan as a candidate of the Democratic Party. He definitely has a greater hurdle to cross in the Democratic primary to come up in August 2018.

This relatively unknown technocrat who has got no political muscle in terms of experience, as well as a network of political associates, is however not deterred by the obvious challenge he will definitely face in his quest for the highest political office of the state of Michigan. America being a country of equal opportunities irrespective of race, colour and religion has recently been punctured by the emergence the eccentric Donald Trump and the cultural qua religious backlash of globalisation. Yet El-Sayed obviously aware of these still has his eye on his dream and he is leaving no stone unturned in his quest to bringing it to reality.

This young Michigan Muslim, an Immigrant from Egypt, aspiring for the highest office in his state is a model for young Nigerians who have desires to run for political offices in 2019, especially those who are still undecided based on the usual question of political naivety and experience – two issues that have been used to disenfranchise and discourage young people in Nigeria from contesting for political office. Perhaps it’s high time they looked beyond the challenge and begin to sell their manifestoes and agendas from house to house, street to street even as El-Sayed is doing in Michigan. Young Nigerians with political ambitions must realise that even if things do not turn out as planned, the fact that they made an attempt means that they changed the system and even themselves forever by daring to shot at the sky with an arrow.

Sayed is a cognoscente when it comes to issues related to public health, he is an internationally recognised expert on issues related to public health and has several dozens of publication to his credit. A former Assistant Professor in the Department of Epidemiology at Columbia University, El-Sayed is no doubt a master of the game when it comes to the academia. The closest he was to politics was when he was appointed the Executive Director of the Detroit Health Department and health officer of the city from 2015-2017, thus becoming the city’s top public health official. El-Sayed could become America’s first ever Muslim governor if he succeeds in 2018.

Though he El-Sayed is not finding things easy especially given the challenge coming from members of his own party, many of whom have described him as politically jejune, young and inexperienced. Most interesting is the way and manner he is going about his campaign, having an understanding of the forces he is up against and those that had gone through a similar situation, particularly Bernie Sanders. Interestingly he is taking a door to door approach to his political campaign. He knocks on doors with his campaign pamphlet discusses issues with those he meets, outlining his policy position. Those he has not been able to win over with this, he was able to sway into a cross road, making it difficult to hold on to what they once held with evangelical fervour.

Even If El-Sayed is unable to clinch the ticket next year, Michigan politics would never remain the same again and even he would have been changed forever, because he would eventually get what he wants, not only him but he would also have inspired several young people who have taken a keen interest in Michigan politics because of his involvement. It is also important to state that this young American Muslim with a northward political aspiration even at an unusual time has offset the balance and would be difficult to wave aside. And as Joe Disano, Democratic strategist quoted in Politico said, “It’s easy to point at him and laugh, but I think you laugh at your own peril, because this guy has more actual real world experience than anyone”.