Home Politics It was change in 2015, what word will politicians in campaigning for... 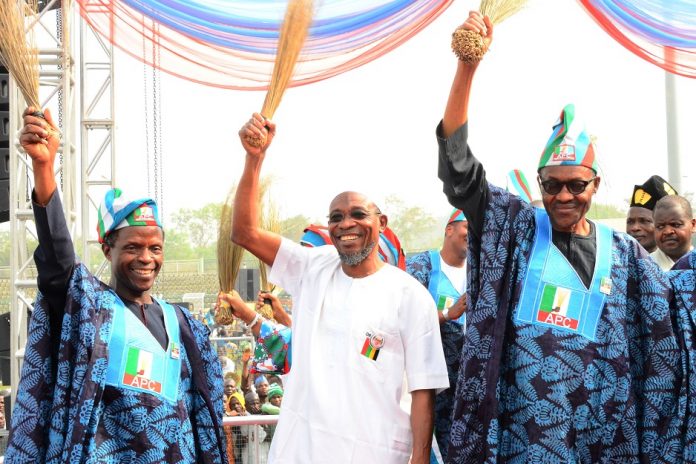 It may appear too early to begin to envisage the political campaign currencies that would be used in the 2019 elections. Yet here in Nigeria, there is never a time you are late or early when it comes to envisaging political happenstances. The reason is not far-fetched. The times are never different politically in Nigeria, the context has always been the same, and even the ranks of the players have never been seriously altered. Hence a political seer will never find it difficult to ply his trade in Nigeria.

In every election irrespective of where it is held, there are always political trade words that drive the campaign which are used in exchange for the votes of the electorate. Even US President, Donald Trump rode on the “Make America Great Again” slogan to warm his way into the heart of the American electorates.

In the general election of 2015 in Nigeria, words such as integrity, corruption, security and most importantly change were used as game changers.

Yet in the 2015 election, the major campaign currencies were ‘corruption and change’. The wind of these two words was more than enough to sweep the incumbent government out of power, and then gave the electorate a fresh hope, something to look forward to. Whether this hope has paid off is another question but the fact still remains that the electorate hoped.

Hence in every election, the ‘class that be’ technically buys vote from the electorate based on their ability to effectively articulate issues using these key currencies. Thus if change and corruption were the currency words used in the 2015 elections, what should we be expecting in 2019?

Every election in Nigeria has its own peculiarity despite the similarity of context, 2019 is definitely not going to be different. For a careful observer of the Nigerian political space, the campaign currencies are beginning to surface, the issues that would form the fulcrum of the 2019 election are out there already and the currency words that would be used to drive them home are being minted.

Here are the factories where these currency words are being minted, from the creeks in the Niger-Delta to the Boko Haram Infested North east, down to the South East plagued with agitation for secession, without forgetting the socioeconomic woes which are consequence of the farmers and herdsmen crisis in the middle belt, even in the south west, kidnapping and ritual killings and emerging insecurity issues would all be used as instruments to forge these campaign currencies.

Yet even as we are earnestly waiting for several other currencies, one of them is likely to standout based on the nature of the issues being faced now, it is already in circulation and propagated by different camps, it is intensely being debated in various facets to determine whether it is worth being a political legal tender, until then, the word ‘restructuring is on trial’.

Is the Red Card Movement the alternative to the PDP/APC duopoly?