Home Politics Buhari and the Blessings of June 12 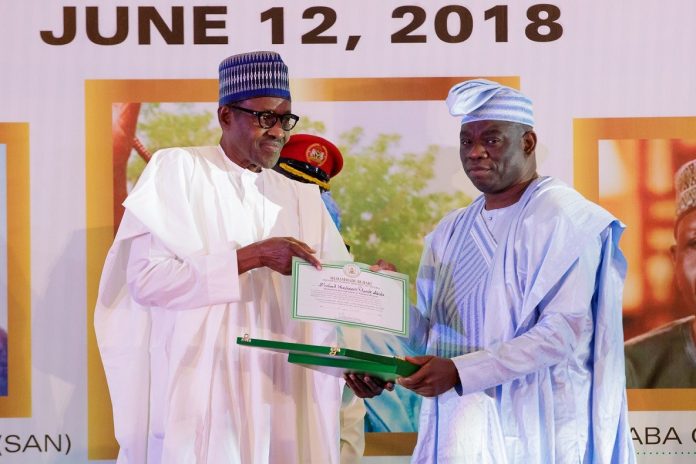 Everyone was taken by surprise. Even the President before this time had probably not given it a thought, and if he had emerged as the President in the years before 2015, he may not have considered it. We were not hinted on May 29, during the usual Democracy Day speech, not as if the President had not known his intention then, yet timing is important when it comes to issues such as this. Buhari brought June 12 to the table, and a section of the country will definitely have a conversation with him, it doesn’t matter what they think, June 12 cannot be ignored.

Though there are several controversies that remain unresolved concerning the recognition of Moshood Kashimawo Olawale Abiola and giving him a National Awards, have we concluded that he is the rightful winner of the election? Can the election result be declared? Can he be officially announced as the President? But all these may no longer matter as President Buhari has tendered an apology and given the unsung hero the highest award in the land – Grand Commander of the Federal Republic (GCFR).

But critics are not exactly unhappy with the act itself much more than the consequence and the effect it is already having on 2019. The politics inherent in the action is not farfetched, especially given the fact that there is a constituency that needed to be appealed to, as well as the timing of the event. It however does not matter if it was well thought through, the deed has been done, it is a shared interest, only the opposition would cry foul.

The race for 2019 has taken a new dimension, it is very much looking as if the ruling party has already gotten one out of three. Even the opposition know the importance of the President’s decision to recognise June 12, somehow they also know that the race is no longer equal, and the terms has changed.

Even at this, it is important that the electorate consider other issues before making a choice of who to vote for in 2019, but unfortunately, June 12 is one of those issues, and for this, the contest for 2019 will no longer remain the same.

Godfathers are only as powerful as we let them be – Ferdy Adimefe speaks...