Home Citizenship Engagement The #NextLevel Budget; a journey to the Slaughter House 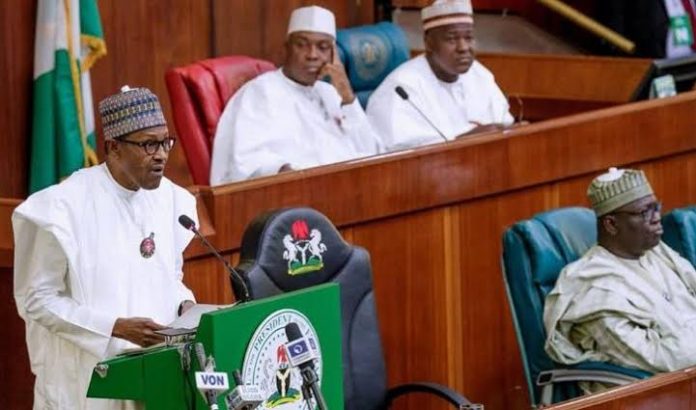 On December 19, 2018, President Muhammadu Buhari mounted the podium of a joint session of the National Assembly, to present the 2019 budget otherwise dubbed the Next Level Budget. Amidst jeers and boos, the President managed to see the budget presentation through. There were shouts of “lies and lies,” when the President claimed that the economy was out of recession.

In the real sense of it, the Nigeria economy is still very fragile and not recovered. The GDP growth has declined from 2.11% in 2017, to 1.9% and 1.5% in Q1 and Q2 of 2018 respectively. This shows a consistent decline in the economy of Nigeria. That is not all.

The total size of the Next Level budget is N8.83 trillion. Budgetary allocation for debt servicing is a quarter of the budget (N2.14 trillion).

Before the APC blames the PDP for debts, the PDP in its 16 years, left very little debts to be paid. In fact, between 1999 and 2015, the PDP, according to the Debt Management Office, left a debt of N8.04 trillion. That is about N500 billion per year on the average. However, the APC has borrowed N6.7 trillion according to the DMO, for 3 years. That is about N2trn a year.

For any country that wants to grow, it must invest largely in infrastructure. The projection for infrastructure in the Next Level budget is N2.031trn. However, let us make this contrast.

The projected total revenue is N6.97trn. More details will be provided on how the government hopes to miraculously reach this figure. That notwithstanding, the difference between projected revenue and projected expenditure is N1.86trn. Here is the tricky part.

Reckon a man who promises his wife a car of N3 million, but earns little above N300,000, just enough to pay his rent and feed his family? That is what Buhari is trying to achieve; empty promises. When shortfalls happen in revenue, it is the capital expenditure that will be attacked because government must service debt and government must pay salaries. Have you seen why this is the budget of death?

The recurrent expenditure is a whole N4.04trn. This is because the size of the government is too large for comfort. Privatisation would have passed these burdens to CEOs, but the Buhari-led administration believes that the bigger the better. Hence, the Nation keeps groaning in pains of inefficiency and value erosion. With privatization, Nigeria could make a lot of money by disposing of a lot of inefficient government-owned enterprises.

Let us go into details about how the Buhari-led FG hopes to arrive at the projected revenue of N6.97trn. The Buhari-led FG hopes to fund this budget using sales from Oil, projected at $60 per barrel. To this, the old pidgin aphorism comes in handy; “who dash monkey banana?” How can you hope that the Global oil prices will jump to $60 per barrel when it is presently at $45, with the Trump-led US that has become self-sufficient in oil demand and a Saudi Arabia that keeps increasing supply? How do you hope that oil prices will increase when all the wars in oil-rich regions are ending. The US just pulled out from Syria. Means that more oil will come from the Middle East. Means more supply. Means that oil prices will even fall harder. So who will sell oil $60 to Buhari? False hopes or deceit?

How about internal productions? Nigeria is struggling to reach the projected 2.3 million barrels per day. However, we produce just above 1.9 million barrels per day. With the current production and prices, we cannot fund our budget. Where will the gap be filled from? Continued borrowing? In the past one year, we have borrowed money for activities we cannot trace its use. Switzerland sent $322.51m Abacha loot to Nigeria and Buhari claimed to share it to Nigerians, but went further to borrow an exact figure from China. Who cheats who?

How about inflation which keeps eroding the value of the Naira? This budget is projected to work at a 9.98% inflation. However, the IMF stated that inflation will rise to 13.5%. Why would the Buhari administration want to hang fellow Nigerians to dry? In the real sense of it, this budget is what it is – a trap.

So many irregularities in the next level budget such that ignoring one seems like a disservice to Nigerians who need to know that they are being led to the slaughterhouse. The Buhari-led FG simply conjured figures for political reasons. A lot of the infrastructural claims have since been debunked by witnesses, while the claim that foreign direct investment has increased, is the latest in the array of false and deceitful lies of the Next level budget. In fact, contrary to this claim, there has been a 48.21% decrease in FDI in Q3 and a 31.12% decrease in Q2.

These show the bowls of lies punctuating the Next level budget. It is unfortunate that this comes during the election period; a period well known for empty promises. Perhaps this is a targeted effort to deceive Nigerians. At least, if Nigerians are to be led to the slaughterhouse, they must know where they are headed. That is what this article sets out to achieve.