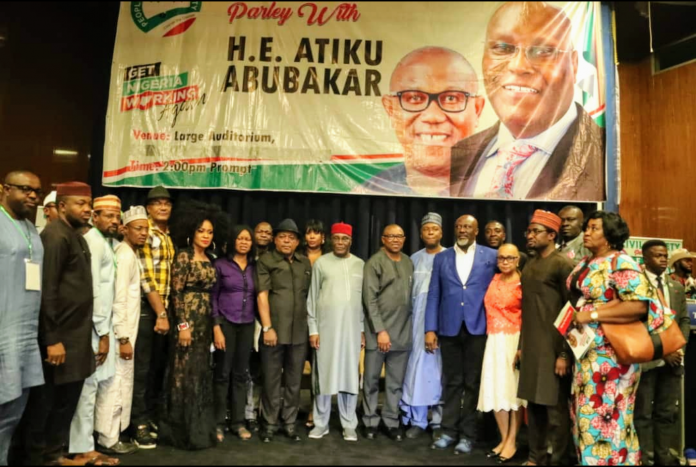 Buba Galadima, a former supporter of Muhammadu Buhari apologised for supporting the presidential candidacy of President Buhari stating “this is not the Buhari that we know.”

Bukola Saraki, in his speech, lampooned the 2019 budget presentation by President Buhari, asserting that “this budget does not have a plan for anybody.” This likely follows a series of accusations that the Buhari-led FG had claimed that uncompleted projects were completed in the budget.

On the controversial electoral act, the Senate President stated that “INEC told us they have enough time to implement the electoral amendment bill, the President does not have an excuse.”

Bob Manuel Udokwu spoke about the numerous investments of the PDP regime in Nollywood, saying the “PDP and Jonathan was the first government that ever invested in the creative industry.”

He continued, “At some point, Nollywood was the second largest employer of labour, now Nollywood is Moribund.”

Bob Manuel went on to state reasons why Nigerians must support the PDP back to power because the PDP means it when it states that it is all about jobs, jobs, and jobs.

Peter Obi, who was described by Dino Melaye, as the man who turns orators to stammerers, spoke succinctly about all that was and is wrong with Nigeria.

Obi castigated the lackluster approach of the Buhari-led FG on infrastructure saying, “They tell you that they have been borrowing for Capital Projects, which capital project is more important than Lagos-Ibadan expressway? How much have they released for that?.”

On the claims by the FG that there is no money in Nigeria for infrastructure, Obi said that, “People keep asking – Peter, where will you find the money for these projects you’re talking about? I always respond that I have governed a state successfully. And we found the money.”

Obi added that the bank of industry, which is supposed to fund the industrialisation as a whole, has been reduced to a micro-credit bank.

Atiku Abubakar talked about working with the civil society to guarantee dividends of democracy. He said, “Democracy will not survive without Civil Society organisations.”
Atiku stated that it was the PDP that brought democracy to Nigeria and not APC, and that “The dignity of Nigeria starts at home, not abroad, when we dignify Nigerians at home, we will be dignified abroad.”
The former Vice President went on to discuss how it was important that a synergy between the Civil Society and political parties should be established.