Home Election Should Nnamdi Kanu contest for president in 2019? 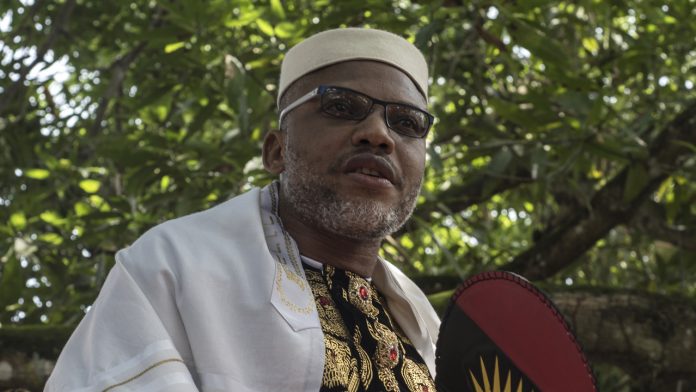 Perhaps the leader of the Indigenous People of Biafra (IPOB), Nnamdi Kanu should run for the office of the President in 2019.

It would be interesting to have someone with such a gargantuan support base run for election.

Nnamdi Kanu is arguably one of the most controversial personalities of our time. He is also the only one in a long while who has been able to garner the attention the Igbos – a people characterised by acephalous egalitarianism. Even the great Emeka Odumegwu Ojukwu lost them at a point in time.

Nnamdi Kanu was born immediately after the civil war; hence he is free from the burden of history. He is young, educated and charismatic, and information savvy, he understands how to use the instrument of propaganda.

The IPOB leader would definitely not be faced with the problem of lack of name recall, because he has a name that resonates across all boundaries, he has the social capital. There is arguably no other politician in the southeast that has the kind of followership base that Kanu has. Perhaps only President Buhari can rival him in terms of his fanatical followership base. They do not just have followers; their followers are fanatically committed to them.

For several years, he has appealed to the sentiments and emotion of his people from abroad using the instrument of propaganda; he has succinctly communicated his intentions and won them over. He has reawakened the elusive Biafran dream, daring to give it a scintilla of hope even when it is obviously dead never to rise again, at least in our time. How about Kanu channeling these energies to contesting for the office of the President in 2019. Hence, giving the Ibos a generally accepted candidate for the election.

He has been able to unusually draw attention to the plight of his people even when similar efforts by other groups before IPOB had failed. He recently had meetings with the governors of the southeast with Professor Ben Nwabueze accompanying him, he had announced a public holiday within the Federal Republic, and he was largely obeyed, he has threatened the upcoming Anambra election with a boycott and got the leaders waltzing around with panic and coward nervousness.

This Kanu guy should run for the office of the President in 2019, he is popular not only among his people. Even the Southeast socio cultural group, Ohaneze Ndigbo is being political in their dealings with him. He has also gotten the attention of the southwest, at least in his fellow Biafran, Ayo Fayose who has also announced his Presidential ambition.

And the moment, there is no other young person with the social capital, fanatical followership base, name recall, and even the financial muscle that Nnamdi Kanu has. He might be a maverick, but he is definitely a break from the usual and extant generation of politicians we are used to. Hence he should test his popularity in 2019.

But first, he has to drop the illusory Biafran dream and find a way to achieving it within a united Nigeria.

Maybe in Kanu’s Nigeria, we would all stop being seen as animals in a zoo, first by him.

Lagos to build innovation and technology centres across the state to address the problem...