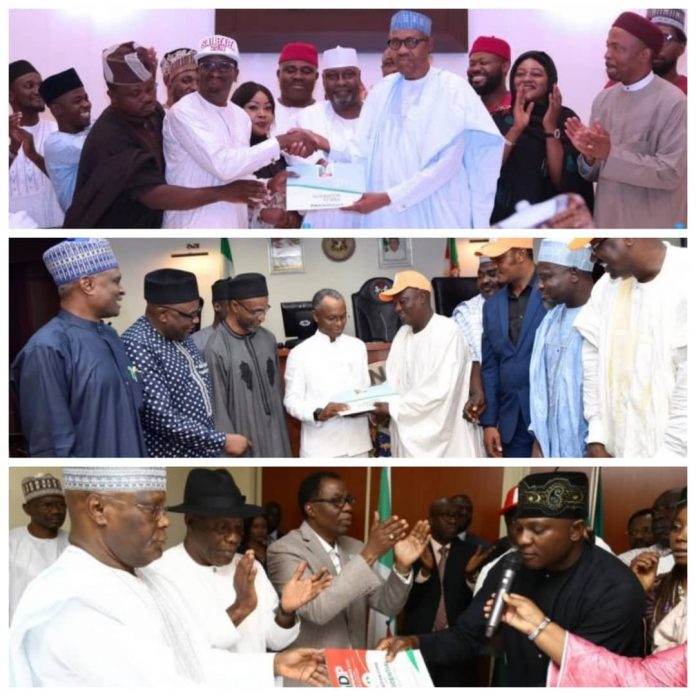 Activities gearing up to the 2019 elections have intensified in the past few weeks, with the various political parties opening the window for the purchase of forms for expression of interest and nomination for various elective positions.

While this process is largely constitutional and guaranteed under the Electoral Act, the manner in which it has been carried out in the current election cycle is worrisome and has thrown up more questions than anticipated.

In the last one week, various politicians especially on the platform of the ruling All Progressives Congress (APC) have been bought forms by supposed support groups sympathetic to their ambition to run for office or to encourage them to return for a second term, the most prominent being the case of President Muhammadu Buhari who had his forms bought by a group named, Nigeria Consolidation Ambassador Network (NCAN).

Other cases includes those of former Vice President, Atiku Abubakar of the People’s Democratic Party (PDP) who is gunning for the top office in the country, received his own forms bought for him by a coalition of Atiku Support Groups (ASG ) on August 31; Governor Nasir El-Rufai of Kaduna who had representatives of the Association of Cattle Sellers, Independent Petroleum Marketers Association of Nigeria (IPMAN), NATO, Sheikh Gumi Market Association, among others, purchase his forms for him, Governor Abdullahi Ganduje of Kano, had his bought for him by a coalition of 32 groups under the aegis of ‘1 to tell 10.’

Some of our numerous Support Groups of their own volition, contributed, paid for and collected The Presidential Nomination/Expression of forms for H.E @atiku.

Happening Now: Representatives of IPMAN, NATO, Sheikh Gumi Market Association and the Association of Cattle Sellers have come to present Governor @elrufai with the APC expression of interest and nomination forms which they bought for his re-election bid. pic.twitter.com/FAcdHnH8RD

On Monday, the Senator representing Kaduna Central District, Shehu Sani, also said that some “struggling youth” offered to purchase his Senate nomination and expression-of-interest forms but he turned down the offer because he didn’t want to be in the “league of that deceptive political tradition.”

A group of youth struggling for daily bread approached me that I should permit them to announce that they bought a nomination form for me,as part of the political tradition,I politely declined.I don’t want to be in the league of that deceptive political tradition.They agreed.

When I decide to run for elective office, no way any Party that charges above N100,000 for Nomination Forms would get my membership.
Tufiakwa. I would not want some amoeba group paying for my form with money that has an OPAQUE source.
Also, I’ll do Transparent Fund Raising.✌🏿

Shehu’s statement about “that league of deceptive political tradition,” indeed exposes insight as to what we should worry about, as the general election approaches and mirrors a number of pertinent questions which include:

“Who really are these groups falling over each other to buy these forms?”

Also, picking a leaf from #BBOG Campaigner, Obiageli Ezekwesili’s tweet, “Are the funding for these forms really from opaque sources? Could they be proxies of the beneficiaries?”

While we watch the developments as they unfold in this regard, we cannot also close our eyes to the position of the law in relation to this charade, which explains the need for the Independent National Electoral Commission (INEC) to enlighten the electorate on the issue of purchase of forms by support groups running into millions of naira and what the Electoral Act says about the issue.

This action will indeed help to nip at the bud, the issues of corruption and deceit that may be associated with the process.

There is also no gain saying that this new dimension to politicking in our country, coming few months after the promulgation of the popular #NotTooYoungToRun law, is a mockery of the struggle, by the ruling class as presently constituted, since the major parties have decided to muscle out youthful representation in the next phase of the country’s governance by fixing outrageous prices for the forms of elective offices across the land.