Home Politics Money will flow in 2019 election, like it did in Ekiti 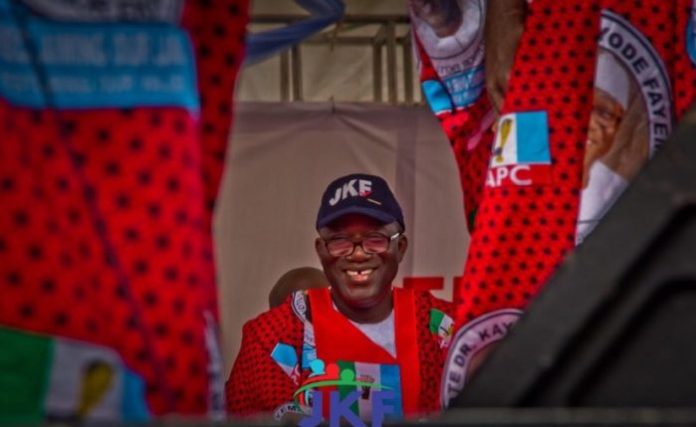 Interesting, though the Ekiti election may seem, for faithful onlookers and believers in a better Nigeria, it is the usual setback. The tragic fact is that we are not making progress in any way, and for 2019, we can only hope that fate leads us on the path of the fabled “Nigeria go better”.

The just concluded Ekiti election is nothing but a travesty of democracy; it is the irony of our plight as a people that our leaders keep us perpetually impoverished, only to take advantage of our poverty. An impoverished citizen is no citizen, for he does not cast his vote with the authority of a sound choice but the penitence of a beggar who surrenders his choice just for momentary gain.

This is exactly what happened in Ekiti, it was never going to be an election, it was a selfish individual war between two egoistic people fighting for themselves rather than for their people.

In 2014, when Fayemi was the governor, Ekiti state did not fare better, the same situation and condition he is exploiting now was exploited by the outgoing governor, Ayodele Fayose. Fayemi ruled for four years without a social safety net to effectively address the issue of poverty in a state where the government is the only employer of labour. If the only thing you do as a governor is not to give the opposition the opportunity to exploit the socioeconomic condition of your people to seek for elective position, or if all that you have done for four years is to fight extreme poverty and provide social safety net for people, you would have immortalised yourself even while alive just like Lateef Jakande. But in this, both Fayemi and Fayose are failures.

How do you not have any credible and tangible reason to convince your people to cast their vote in your favour, how do you resort to buying votes as the only way to retain a position? Should we trust a man that corrupts the conscience of his people to seek their mandate? These are questions we might never find answers to.

Isn’t it disturbing that both Fayemi and Professor Kolapo Olusola Eleka never for once or in any gathering gave a detailed outline of what they intend to do when they get elected? Is it not more disturbing that the people never asked or cared to know?

There were reports that Fayose paid N3000 to people to cast their vote in favour of his party while Fayemi was said to have paid more, N5000, good business you might say, but this is not good for our democracy and it somehow draws us back. It is shameful that these two candidates are taking advantage of a situation that they have both been in a position to address.

There is practically no difference between 2014 and 2018 in Ekiti, at least in intent, same federal might Fayose brought to bear upon Fayemi in 2014, Fayemi also brought with impunity. The same issue of stomach infrastructure recurred, and this time, it was Fayemi using it well in his favour.

What exactly does this portends, whether we like it or not, they that would come to equity must come with clean hands. We cannot place our hopes on leaders who take advantage of the situation they are meant to address to seek re-election. We cannot trust a leader who pays his way to swindle people off their vote, one who lacks the moral standing, a leader who even if he wins has started off on a wrong footing.

In the long run, it will take more than the present generation of leaders to cause a tectonic change in Nigeria, and the citizens would have to rise above this ephemeral pettiness if they are desirous of this change.

Is the Red Card Movement the alternative to the PDP/APC duopoly?